The album sleeve tells us that ‘Elisa Tomellini is the first woman to perform the original version of the Etudes apres Paganini’. I’m not sure how the marketing people would verify such a claim, but certainly Ms Tomellini does not need this kind of guff and, I suspect, would anyway prefer to be judged by the quality of her playing than by any tangential uniqueness. One thing the otherwise helpful liner notes don’t tell us is that Liszt dedicated both the 1838 version of these studies recorded here and the simplified one he published in 1851 to Clara Schumann, of whose playing he said that ‘everything concerned with her art is noble and without pettiness’. I’m happy to say the same of the pianist here, and indeed much more.

It is a rare delight these days to hear a pianist who dares to play pianissimo – rather on the lines of Leslie Howard’s recent observation in these pages that what was lacking in much piano playing today was charm. There is charm here in abundance, together with staggering virtuosity, If occasionally the spirit overtakes the latter (in the second Paganini study we at times lose the 4/4 metre), perhaps Liszt should take the blame with instructions such as carratteristicamente and fantasticamente. Finally, not the least of Tomellini’s abilities is her grasp of form. The near 10 minutes of’ Il lamento’ can seem self-indulgent, but here everything unfolds naturally and meaningfully. And the piano sound is superb. 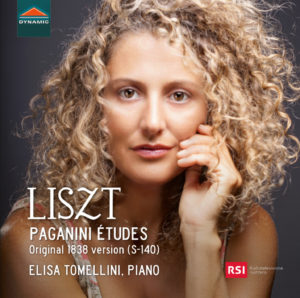 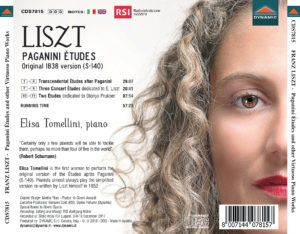 Stream the Album for free :
SPOTIFY
Find other ways to play it \ buy it :
PLAY IT / BUY IT

This website uses cookies to improve your experience while you navigate through the website. Out of these, the cookies that are categorized as necessary are stored on your browser as they are essential for the working of basic functionalities of the website. We also use third-party cookies that help us analyze and understand how you use this website. These cookies will be stored in your browser only with your consent. You also have the option to opt-out of these cookies. But opting out of some of these cookies may affect your browsing experience.
Necessary Sempre abilitato

Any cookies that may not be particularly necessary for the website to function and is used specifically to collect user personal data via analytics, ads, other embedded contents are termed as non-necessary cookies. It is mandatory to procure user consent prior to running these cookies on your website.